Inflation has set a record of 9.6 percent in Saudi Arabia in March due to sharp
rises in rents and the price of food, an official new agency says....

Tell me about it! Ugh... ever rising prices. Although many compound rents have increased by at least 50% and are continuing to rise.

بسم الله الرحمن الرحيم
With Riyadh temperatures soaring to 50 degrees celcius and more in the summer months, families have to find indoor activities and you will find that the vast majority of Riyadh's numerous shopping malls will have children's play areas incorporated. The one pictured below is at the fairly new Hayat Mall in Riyadh and has a good variety of games for children of all ages - merry-go-rounds, trampolines and trains for the littlies, a decent roller coaster and ice rink for the older children among other things. It all makes for a welcome afternoon out together. Better to go in the afternoon and leave by isha prayer as isha is when the malls and play areas become particularly busy. 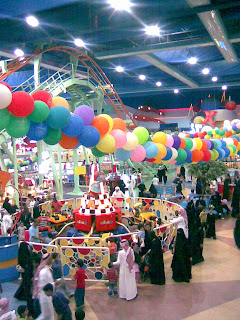 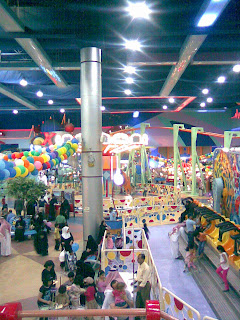 My 12, 10, 7 and 4 year olds all enjoyed having a go at the sand art where you choose a picture and piece by piece peel off the backing paper to reveal a sticky section on which to apply different coloured sands. 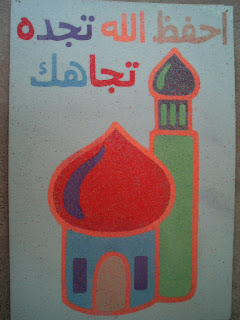 The food court and prayer rooms are not far off as usual so it is easy and convenient to pause to pray maghrib and to take a break for food. An array of different fast food choices including the ever present McD's, Chinese, Lebanese, Pizza and a very nice new Spanish food outlet selling filled baguettes. Our choice was chicken and Brie.... yummy all round!
And of course, the children always like to finish off the outing with an icecream so yay for Baskin' Robbins! Of course there are also the doughnut vendors such as House of Donut and the newly opened Krispy Kreme as well as cafes for the grown ups to sip on a Latte - noone is left out. :)

A big thanks to fellow blogger Rainbow in the Grey Sky for her perfect recipe for doughnuts!


I followed her recipe exactly and then after they were cooked and rolled in sugar, I used a cake icing piper and pushed a hole into the side of each doughnut and squirted in some jam or some Nutella chocolate spread. Absolutely delicious and so light and airy! An absolute hit with the family especially the husband who seemed to be reeling in shock at my cooking success all evening! Nothing I have cooked has ever had that effect, lol! 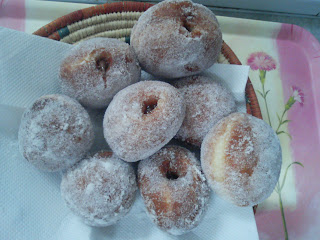 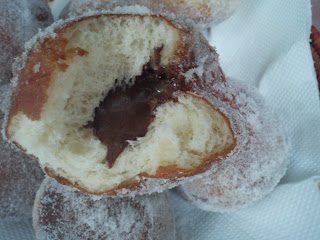 Such an easy thing to make, especially if you have a breadmaker to do the kneading and rising stages for you. If you love doughnuts, I urge you to try the recipe!

The Saudi blogging community woke up to good news today: Early this morning Saudi blogger Fouad Al-Farhan was released from the Jeddah prison where he has spent the past 5 months (137 days) without charges. All that official statements said about the reason for his arrest and subsequent detention was that he had, "violated regulations".

According to Fouad's family and friends, he is out of and prison and is well... alhamdu Lillah.

Women (not) driving in Saudi Arabia

بسم الله الرحمن الرحيم
I know it's an old issue and an old rant but I have been realising more and more lately how much potential danger women in Saudi Arabia are placed in just because we are not permitted to drive here.

There is some skewed reasoning in this country that bans women from driving but allows them them to use family drivers and taxis to get about. Since we are not allowed to drive, ideally our husbands would drop us everywhere we need to go but realistically this is not possible in many cases, most husbands have a full time job to hold down as well as taxiing the family to and from various appointments. Children need to be dropped at and collected from school, many women work outside of the home and need to get to their place of employment, food provisions need to be bought from the supermarket, women and children need to visit the doctor or dentist from time to time and so on and so forth.

As a general rule I don't take taxis but there are times when the rule has to be broken; times when my husband isn't even in the country and I have urgent appointments, sick children etc. At these times I am forced to take a taxi to my destination but how can I be sure of the trustworthiness of the driver? Recently I have heard many warnings about the dangers of using taxis which is really alarming. I have read reports of cheap labour from certain countries and how those countries are allowing ex-convicts straight from jail to take up menial jobs in Saudi Arabia.

I know I don't particularly relish the idea of driving in Riyadh but I do look forward to the day when women are permitted to drive and go about their daily business without having to rely on men and without obstacles blocking the way.
Posted by Umm Ibrahim at 4/25/2008 06:30:00 PM 11 comments:

The past couple of years or so have seen a steady increase in once stable food prices in Saudi Arabia but lately we have seen vegetable and staple food prices jumping in price and the past couple of months has seen some very drastic price increases or food shortages. One friend living in Jeddah remarked that she was having difficulty finding flour. News channels and websites have been reporting about global food shortages caused by a variety of factors including urabanisation which leaves less arable land, growing middle classes in developing countries making greater demand on a variety of foods, the use of wheat as a bio-fuel and so forth...

Here are some interesting articles from the bbc website to ponder.

Rice prices 'to keep on rising'

The price of rice has risen by as much as 70% during the past year, with
increases accelerating in recent weeks...

...and prices are set to keep on rising.

The growing appetite among Asia's burgeoning urban middle class, especially in
India and China, for meat and dairy products is also leading to less land for
rice production.

In a bid to solve food problems in India, India has implemented a rice export ban on all non-Basmati rice which is having repercussions in the Middle East since rice is also very widely eaten here. Prices are risely quite drastically (Asian states feel rice pinch) and some goverments are subsidising rice and some companies are helping by selling rice at cost price. But for how long can they sustain this?

Gulf and Arab residents feel the pinch of rising prices

The cost of food: facts and figures

On top of all this there is a warning about a potential water shortage in the coming decades if the Middle East does not start tackling the problem of water wastage.

Thanks for the tag American Muslima Writer! It was a hard one!

The Rules:
1. Write your own six word memoir
2. Post it on your blog and include a visual illustration if you’d like
3. Link to the person that tagged you in your post
4. Tag six more blogs with links
5. And don’t forget to leave a comment on the tagged blogs with an invitation to play!

Ummihabibati (aka Rainbow in the Grey Sky)

A couple of days ago we had a power cut... it happens every so often and not for a few minutes or so like in the UK but for at least an hour. The last power cut was for about an hour and a half. But this is not a rant. :)

All the kids were home doing their own thing when suddenly... the tv went off, the air conditioning stopped, the washing machine cut out, the fridge stopped humming. All was silent apart from the kids asking what had happened and was it a power cut. Bliss!

Fortunately it was coming on for 5pm when this happened so there was about an hour of daylight left and the children could still see to play. Maghrib approached though and still no electricity. Our water works on a pump so no leccy means no water... I have an old 5 litre zamzam bottle full of tap water put aside for such incidences so I was able to pour some into a bowl for our wudu'. It was a lovely feeling peacefully making wudu' on the back doorstep from a bowl of water and the only sounds to be heard were the birds fleeing to the trees as they do at dusk and of course, a chorus of adhans from the local vicinity.

That maghrib I prayed was the best prayer I have prayed in a while, with the highest degree of khushoo' in a while! The house was peaceful; there were no thoughts in my head of what needed to be done after prayer since no electricity means no cooking, no washing, no ironing and so forth... It was just me and my Creator and Maghrib salah alhamdu Lillah.

I must confess to feeling quite disappointed when the electricity came on a few minutes after I had prayed but the children enjoyed going around the house blowing out the candles. :)

We ate out yesterday and very nice it was too. The prices in the restaurant we went to are excellent; there are not many places where a family of 7 can choose a wide selection off the menu (hummus, mutabbel, Turkish bread, kibbeh, salad, open shawarma, chicken shish tawouk, lamb chops, chicken soup, lentil soup and drink freshly squeezed orange and pomegranate juice for just 120Riyals (c. $32 or £16)!

As we preparing to leave hubby noticed a sign inside the restaurant which mentioned that lots of places are increasing their prices but they do not intend to.

The closing sentence, referring to profit, said (in Arabic): A little bit with Barakah (Allah's blessings) is better than a lot with greed.

Beautiful! No wonder it's one of our regular places to go with the kids! Far better than McDonalds and Pizza Hut!

بسم الله الرحمن الرحيم
A quick photo post of some of the mosques I have photographed recently in Saudi Arabia and UAE... 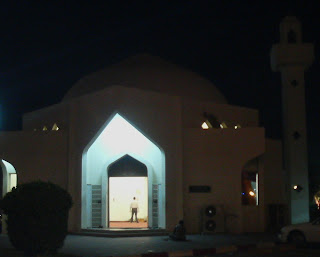 Small masjid near Riyadh centre ... I just loved the simplicity of this masjid and the figure of the man who can be seen praying 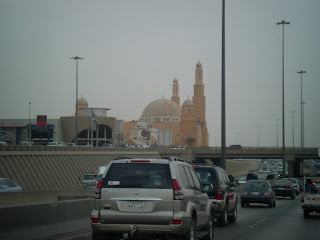 Big masjid on the road out of Riyadh towards Kharj. This masjid has all the space and facilities for washing the dead and performing janazah prayer. 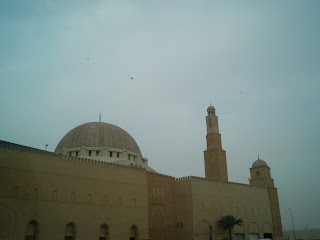 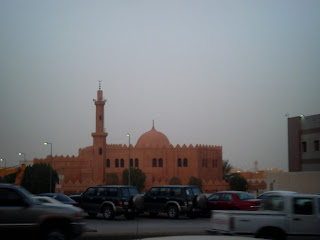 Masjid towards the north of Riyadh... sandy skies in Riyadh! 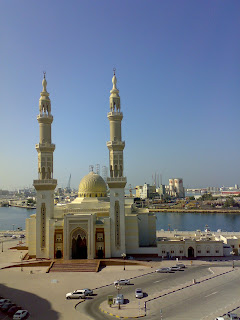 Sharjah, UAE (next to Radisson hotel)... the masjid, carpark and road which is not in photo were jampacked with worshippers for the Eid ul-Adha prayer 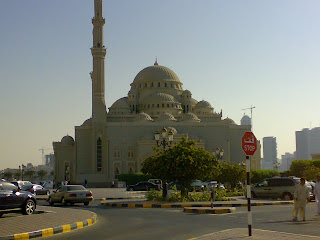 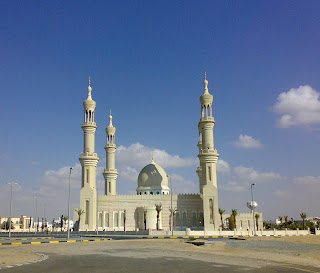 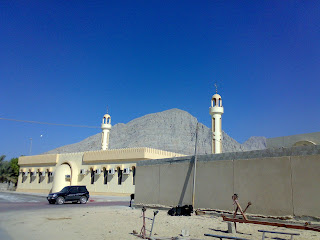 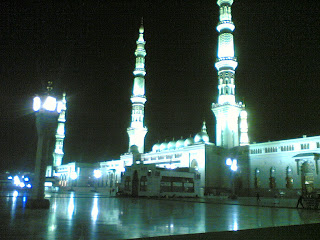 Looking down an alley towards Masjid al-Nabi