A modern retelling of an old tale

My 10 year old had to make a poem of a traditional story for her homework. She chose Rumpelstiltskin and we worked on it together. The following is what we came up with. Quite a formidable duo we make, methinks! LOL

Once a miller boasted to the king,
That his daughter could make gold in a ding,
All she’d need was plenty of straw,
In order to give him gold galore!

The king was rich and far from needy,
But alas he became much too greedy,
“Gold!” he drooled, “And lots of it!”
I could even have a golden throne on which to sit.”

He filled a room with straw, and in he pushed the girl,
“Hurry and spin by morning, so go on, give it a twirl!”
Desperate, the poor girl sat and wept,
When suddenly, in a little man crept.

“Aye, aye,” said he, “You look like you’ve had a fright.”
Weeping, she told the man of her plight.
He agreed to help, they struck a deal,
Then at once he got spinning at the wheel.

In the morning, the king came in,
“Ahh, I see, you spun it in the night within!”
He was happy to see the room filled with gold
But thought, “I need much more since I am getting old.”

He gave her still more straw to spin into gold.
Again the little man came to her and thought , “This is getting old!”
They made a deal; “I’ll spin the straw but if you and the king should marry,
I want your firstborn child, but just don’t call him Harry!”

The straw was spun, the girl and king were wed,
In time she forgot the promise she'd made,
And soon she was blessed with her very own child,
The man reappeared looking quite wild.

“You must keep your promise and give me what’s mine,
Unless,” said he, “You can guess my name then it’s fine!
If you guess my name in the next three nights,
Then keep your baby and there’ll be no fights.”

She guessed and guessed, “Charlie? Bob? Dave?”
Each time he said, “No way, that’s not it. Behave!”
A messenger helped her and gave her a clue,
She knew it was right and knew what to do.

The last day came and she said, “Pot Belly? Cherry bun?”
Until, she said, “Perhaps RUMPELSTILTSKIN is the one?!”
He shouted in fury and went quite red. “You cheated!”
He spun and spun right through the floor and was defeated.

بسم الله الرحمن الرحيم
One question I notice mothers of small children, asking frequently is "When should I start teaching my child about Islam?" I say, it's never to early! Start from birth saying 'Bismillah' aloud when you begin to feed your child; say other phrases such as 'alhamdu Lillah' upon sneezing or completing a meal and 'assalaamu alaikum'; pray in the presence of your child and so on.

My youngest daughter is 14 months old and now she will even pause from breastfeeding to say 'dandada' (alhamdu Lillah) with me if I sneeze and she always says it when she sneezes. She makes ruku' in front of me at salah times and now seems to be practising the juloos (sitting) position, masha'Allah.

Children are little sponges and readily soak up and copy all our good habits but beware because the opposite is also true!
Posted by Umm Ibrahim at 1/25/2008 07:22:00 PM 6 comments: 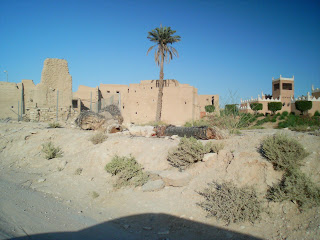 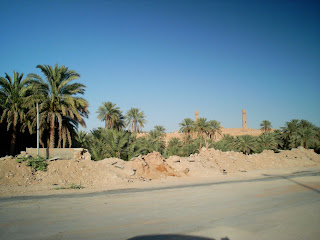 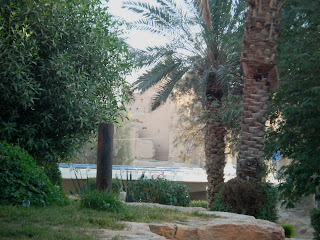 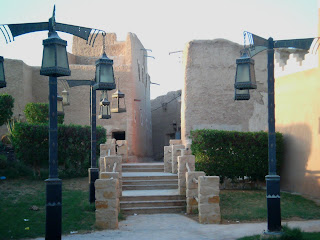 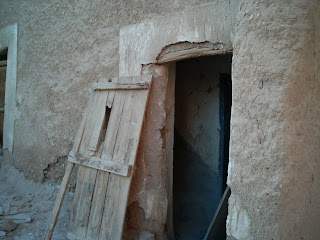 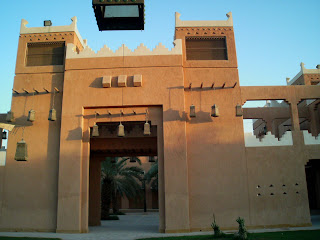 بسم الله الرحمن الرحيم
I wanted to make a new post this morning after a couple of weeks of blogging silence and not really knowing what to blog about. Cold, wet weather in Saudi provided my topic but I couldn't work out how to make my new post. All the links on the Blogger page were in Arabic and none were taking me to where I wanted to be to make my new post. Aaargh!

Eventually I clicked on the little orange and white 'B' logo which took me to yet more Arabic but I noticed a pull down menu of 'lughaa'... languages, alhamdu Lillah and was able to switch back to English.

So the news on the Blogger page is that 3 new languages have now been added: Arabic, Persian and Hebrew. Just my bad luck that living in Saudi made the default for me Arabic and 7am was too early in the morning for working out how to get back into English!
Posted by Umm Ibrahim at 1/22/2008 08:17:00 AM 7 comments:

If you keep up with some of the other Saudi related blogs you may have noticed a common topic over the past couple of weeks or so… yes, the weather. It seems that those of us who live in this normally hot country with little variation in the day to day weather suddenly have an obsession with the weather. Well, you can hardly blame us; after baking in temperatures of 45 degrees and upwards (sometimes soaring to the lower 50’s) cooler temperatures and rain are welcome guests at this time of year.

Umm H.A.Y. has been enjoying much more tolerable weather over in Jeddah masha’Allah whilst Suhaa has been wondering whether it is really cold enough to bundle her children up winter coats over in Madinah. Even the Arabnews has been reporting our favourite subject and mentions that 0 degrees Centigrade… yes FREEZING, was recorded in Riyadh this month!

So, the weather has become the national obsession and today it’s my turn to blog on this subject and the reason for my excitement… I have woken up to wet road! Yup, it rained in the night. Alhamdu Lillah. I have been receiving SMS messages from my mother in the UK about the over-abundance of rain there, the flooding, the gales and the general misery caused by the unrelenting wet weather whilst here in Riyadh, mosques (and indeed mosques all over the Kingdom) have been calling people to prayer to supplicate Allah Almighty for His blessing in the form of rain:

Oh Allah, give water to Your slaves, and Your livestock, and spread Your Mercy and revive Your dead land.

Living in such a dry country where we see no rain at all for much of the year has really opened my eyes to the blessing contained in rain and how much of a gift from Allah it really is. When I visit the UK, I love to drive through the countryside and enjoy the greenery… over grown green fields and trees in abundance and yet here in Riyadh orange is the predominant colour… sand! How amazing it is to take a short drive into the desert after rainfall and see little streams formed in the sand and a hardy little bush bursting into leaf. Allahu Akbar!

بسم الله الرحمن الرحيم
One of the nice things about living in Saudi Arabia is the way locals act towards me when they realise that I am not a born Muslim. Funnily enough this is the thing that annoys my mother-in-law as she thinks people are being nosey when they suddenly drill me with 101 questions but I find quite sweet and funny really.

I'll be in the masjid or musalla of a shopping mall with my brood of kids, wearing my abaya, hijab and niqab just like everyone else and no-one will take any notice of me... I finish my prayer and turn to one of the children to speak, in English. Suddenly all eyes are on me, puzzled. Then someone will bravely ask, "Muslim?" (Funny, because not only am I clad from top to toe in Islamic attire, but I also just did salah!) Next I will be asked if I am from Bosnia, Syria, Turkey... then the surprise when I say I am "Min Baritaaniya" (from Great Britain) and the conversation will continue depending on how good the lady's English is or how I am able to manage in Arabic.

Just today, I was in a supermarket with my two youngest children and my son fell over, I turned and said to him, "Are you alright? Come here and hold my hand." An old Saudi lady who had been looking at the bread came to me saying, "Masha'Allah, masha'Allah," and grabbed my hand to shake and then kissed the baby!

I know there are many, many convert sisters in Islam across Saudi Arabia but when we go out covered up we are hard to spot so it seems like such a novelty for the born Muslimahs in this country. It is so nice seeing how happy for me these people are, when they discover that I accepted Islam of my own volition (I converted before I met my husband). Alhamdu Lillah.