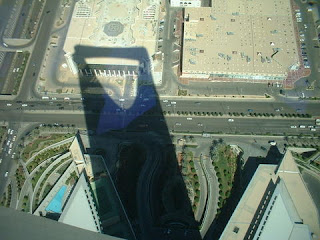 It's times like today when I feel so irked about having to rely on men. My husband is overseas on business, the kids are on school holidays so I decided it would be nice to get us all out of the house for the morning by going on the compound bus to the Mamlaka shopping mall. Yes, I know there is an almost brand spanking new car sitting outside the front of my house and the keys in the cabinet but being a woman in Saudi means the car will have to stay sitting outside the front of my house until the hubby gets back from his trip!

Sooooo... we got on the bus this morning, the shop-ping bus, notice the word 'shopping'. There were me, my 5 kids and a couple of other ladies. The driver is new and was taking a bit of a round and about route but we didn't really think anything of it until he started making a u-turn in an odd place... it was at that point that we realised the guy was taking us to the Mamlaka hospital! Purleeze! Even after after our protests he seemed a bit surprised that he was supposed to be taking us to the Mamlaka mall not the Mamlaka hospital. Eventually we arrived at the correct location.

After taking the kids in a few shops and getting them lunch we went outside to meet the driver. There had been two buses coming from our compound, I saw driver A (not the one we came with) and got the telephone number of driver B so I could phone him and confirm that he was coming shortly. When he came the bus was full. Ladies who had been on the bus A for some reason were on this bus... no room for 6 more.

Fortunately my kids managed to amuse me with their silliness on the bus back so I wasn't nearly as livid as I should have been when we finally arrived home. I did speak to the manager about the whole palaver but was very polite. I think we'll just stay in tomorrow.

Aslamu alakum
i know just what you mean sis, subhan Allah i am having a releying on men similar expierence this morning, I decided to dye my grey's anyhow applyed the dye ect ect, went to run the shower to wash it out, guess what NO WATER , ok so i have a reserve tank holding a 1000litres for such days. The pump works but NO WATER , its full as i filled it a few days ago, now i am stuck as ii have only 11 litre of water in 3 gallons, this is for all water use until the main supply returns which could be ........your guess is as good as mine!!!!!! Arghhhhhhhh i emptied the hot water bottle from last night heated up 4 litres and poured it on the dye just washing it out not able to shampoo or nout. scalp turned ginger!!!! The plumber is local but i need a mahram to go get him and to be able to allow him in the home. I get real fustrated in moments like this. Now for your shopping trip alhamduillah for the compound bus sister as there are places like here that don't have such things and i am known to have cabin fever often. My problem is i have the car sitting outside but lack the skills to drive it. Subhan Allah life is full of hardships some big some small , nothing is random all is for a reason that Allah knows best!!!!!

Oh, ladies! Your stories bring back memories of similar experiences, of needing something but not being unable to do anything without the man.

The frustration lies in the fact that we are perfectly capable of taking care of household needs. The effort we'd exert to accomplish our tasks is much less than the effort needed to wait, and do without until the man comes home after a long day at work.

The beautiful thing is that when you finally do accomplish what you need to accomplish, you are so happy and thankful, you are filled with a giddy joy, and you are once again thankful to be living in Saudi Arabia, with all its singular delights and blessings!

"filled with a giddy joy"
I'm not sure about giddy joy Marahm, but, yes I know what you mean!

My problem is having a husband who has to travelled overseas frequently so having to negotiate my way through problems... things that would normally take 1/2 hour to accomplish in the UK take 3 hours or more here.

"The frustration lies in the fact that we are perfectly capable of taking care of household needs."

Frustration is exactly the feeling and it's mutual! I really do feel for my husband having to run so many errands that I could easily do in the UK and in some cases he has to take a half day off work in order to perform some small tasks. For example, registering the birth of my youngest child was quite a feat for him. This a 15 minute task performed by appointment in the UK... here... oh my! Going from one office to another, waiting for the relevant person, filling in forms... I think he had to go to 3 seperate places to get a birth certificate!

I really must stop comparing with the UK else I shall go mad (if I haven't already!)