I took a little trip from my home in the north of Riyadh to the souq in the south on Friday afternoon and took lots of photos as we were driving, so I thought a photo post would be in order! 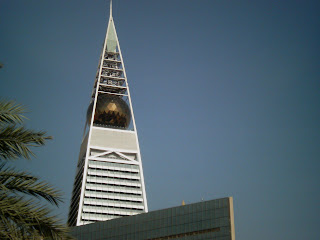 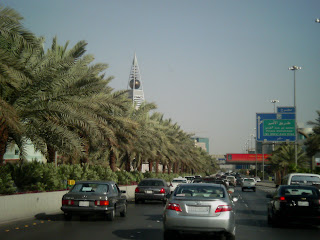 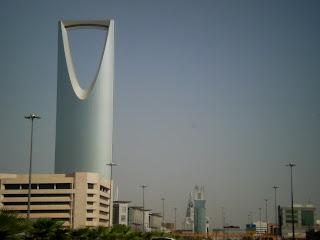 Mamlaka Tower with Faisalia in the distance 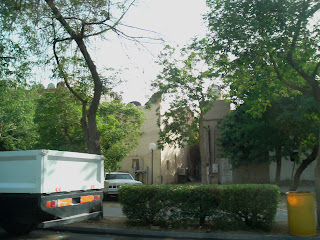 Houses in the older part of Riyadh - Dirah 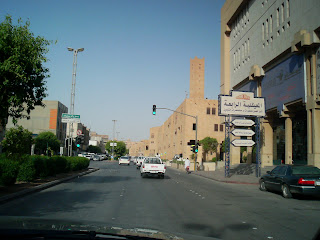 Orange building ahead with a tower on the corner is the Qasr al Hukm - Law courts
Behind the Law courts, the Grand Mosque of Riyadh can be found along with what is commonly known to the expats as 'Chop Chop' square. This is where the hudud punishments are carried out. 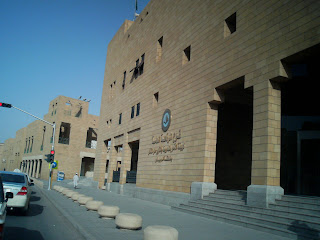 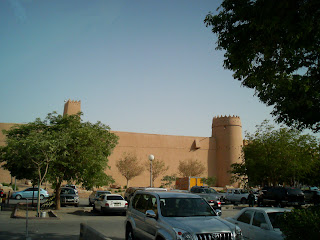 Masmak Fortress which I believe now houses a museum 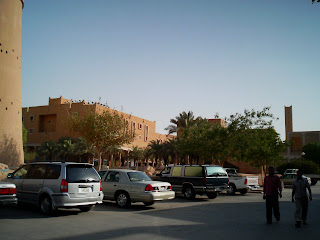 View back towards the Law courts and Grand Mosque 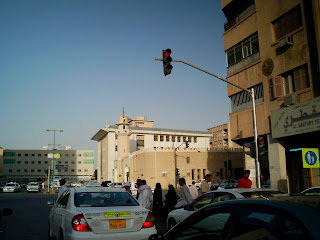 Driving towards Bat-ha
There are more souqs at Bat-ha but predominantly for men. It is not advisable for women to go alone or in the evening when it is very busy. 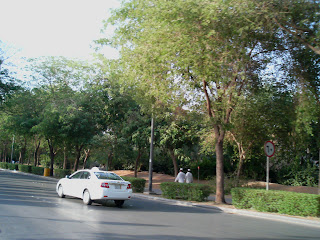 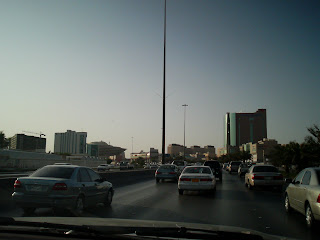 Busy traffic heading back into newer Riyadh
The spaceship type building you can see on the left hand side of the photo is the Ministry of the Interior. 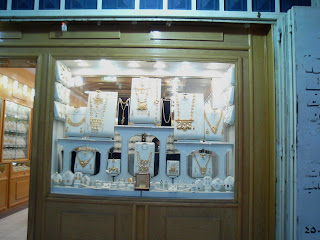 Gold shop at Owais, a souq in northern Riyadh
Check out the huge necklaces on display! 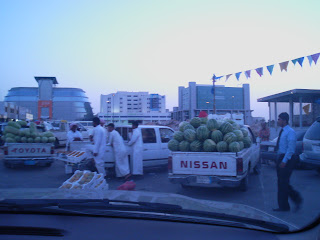 Alhamdulliah, I am glad I found your blog. In sha Allah I will be visiting KSA soon, in shaa Allaah I will keep up with your blog. Come check me out
http://walkingmuslimah.blogspot.com

Nice pic's sis. I am finally back in the living, kind of, so thought i'd check out everyones blog quickly :)

~ummi Pleased to meet you. Where will you be going in KSA? Am opening your blog for a look now!

nice pictures.. thanks for sharing :)

Thanks for the pictures of Riyadh. I looked at them in detail, because I miss living in Riyadh! I was hoping for a photo of the TV tower area, where I used to live.

I never saw the Faislia or the Mamlaka Tower; they were built after I left.

I remember when the Ministry of the Interior was being built. We didn't know it was going to be a Ministry building. One day, while on the bus with an American woman, we passed the construction site, and she said, "Oh, what a large mosque they're building!"

I love the pictures! Very good shots there. Hehe I love Watermelon trucks. In Lebanon they'd all park together in one long line so by the time you decide to slow down and stop there will still be one more to visit instead of making a u-turn.

Where is the tv tower Marahm? Is that around Malaz somewhere? And, when was the MOI built? I thought it was older, I was thinking maybe early 80's but I guess not.

AMW, it's the same in Algeria when they selling at the roadside, plenty of vendors to choose from!

oh, my aunt lives somewhere near the kingdom tower, i was going to make a visit, but couldnt make it:( too bad I always wanted to tour riyadh.

anyway, i hear ryd is very strict with all the mutawa guys around, i mean its not like that in dammam. and do you really have separate days for men and women in the parks? LOL how ridiculous! what abt malls that are the real places of fitnah?

Regarding the colored abayas, lol! i am glad in a way, it drives me nuts to see women wearing tight and embroidered abayas and walking around with those designer bags! why dont you try wearing a grey or a blue abayah? it's so hot after all! if any mutwwa says something to u can tell them where in the Quran does it say to wear black? you can put on anything as long as it's loose and not attractive! saudi and it's stupid rules *shakes head*

YM: I don't feel that Riyadh is that strict; certainly not what I was expecting when I first came.

There are places that have ladies' times and men's times only which can be quite nice and liberating for the ladies to be able to enjoy themselves more. For example the zoo and some of the playparks and museums have different times for men and ladies. The park with grassy picnic areas, horses, lake etc is not segregated in any way and is open to families.

As for the malls actually at the weekend some of them won't allow single men in for fear that tey may harrass the ladies.

I have been known to wear beige of navy abaya here and nothing was ever said to me. =)

interesting...
RYD can b like a tourist spot..
so many places to visit n learn.
how many museums r there BTW?