Now what to do with all the aubergines (eggplant) and peppers (capsicum) that hubby found on special offer?! 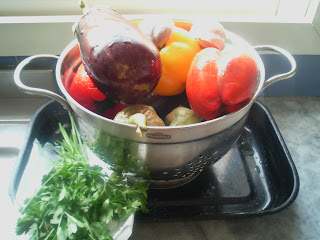 I decided to make them into salad. First I put the washed peppers and aubergines on the barbeque and turned them occasionally until the aubergines were soft and the peppers blackened in parts and blistered. I also put a bulb of garlic on the bbq to see how it would turn out.

Another aubergine I sliced; also peeled a sliced a butternut squash, tossed in oil and then cooked on the griddle until soft. 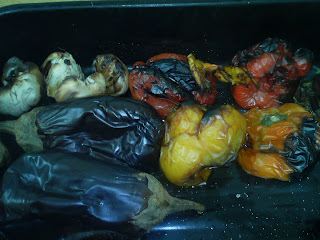 I chopped up the sliced aubergine and sliced butternut , placed on a plate, sprinkled over some crumbled feta, homemade French dressing and chopped fresh parsley. 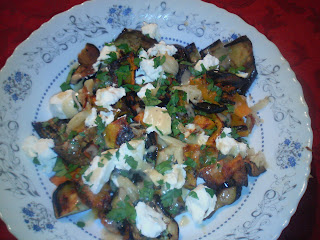 Once the barbequed aubergines were cooled I peeled them and mashed them roughly, added the peeled and chopped peppers, a couple of cloves of garlic finely grated, a splash of balsamic vinegar, a tablespoon of olive oil, salt, the juice of half a lemon and then gave it a good stir... 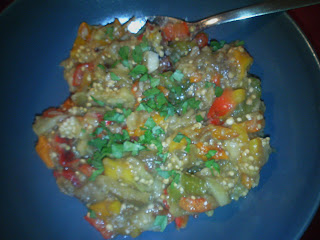 Delicious served on toasted baguette or ciabatta... I was too hungry to toast the bread though! 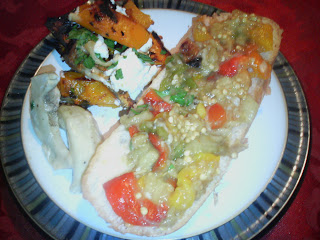 I love roasted veggies..and the self saucing pudding looks too tempting not to try...akh if Only I hadn't started that diet !!!!

That looks good masha'allah! Your blog always makes me hungry ;) One thing I love is sliced capsicum, eggplant, and zuccini grilled. Add a bit of balsamic vinegar, lemon juice, and a tiny bit of salt along with some chopped parsely and basil, yummm its soo nice masha'allah. Something different try the next time.

Wow now that IS soemthing creative to make with eggplant. I despise cooking eggplant but it comes out well so my husband likes when i make it. I just cook mine with rice and veggies Or couscous...easy way ;) Your salad idea looks delicious!

Looks, and sounds, absolutely delicious! Mmmm, and the feta sounds like a perfect accompaniment to roasted veggies. Masha'allah sis!

Assalamau alaikum,
Sis, you are a really great cook! Masha Allah! I always mess up with cooking, and I sometimes wonder how hubby eats what I cooked without a complaint when I can't do that with my dishes! Lucky your husband and kids! :)

Great idea for a salad. I love all the ingredients of this salad , so I think I will love eating it. I will b trying this soon.

Vey nice sister I often make this type pf dish with vegi's in the oven , self saucing pud looks a delight too mashaAllah.