Briefly, Amir Abdel Kader was, "... a political and military leader who led a struggle against the French invasion in the mid-nineteenth century, for which he is seen by the Algerians as their national hero." He lived from 1808 - 1883 and died in Damascus.

The monument below is a statue of the Amir and stands in Algiers on the Rue Larbi. 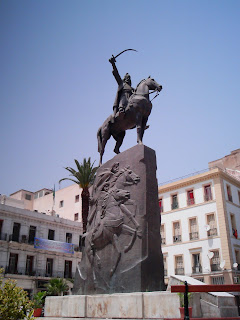 Algeria's first international fast food restaurant, 'Quick' is right next to the monument along with other icecream shops and cafes. 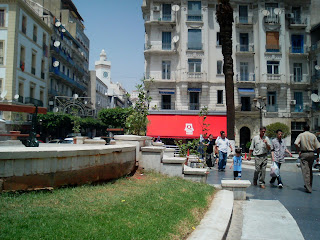 Oh yes, and we did go into Quick as dd12 was desperate for a cheeseburger (kids!). It was packed in there contrary to what I had heard about the place being unpopular and too expensive. A Double cheeseburger with french fries and a Coke was 270Dinars (13.5Riyals; £1.70) - maybe a little expensive by Algerian standards but in line with the price in Saudi and Europe.

My girls still talk about 'quick' as if it was a national treasure...Kids! Salaams, Ines.

yes i felt a lil pricy by algerian stanard and they give you cans of soft drinks dispite having the drinks machinces arghh, I didn't think much of the food, i mean nout special nice to have a chesse burger after 15yrs or so, the wings are nice. Did you see yhe Yves rocher http://www.yves-rocher.co.uk/ shop alongside it? now the prices in there are very expensive perhaps more than Europe?

yves-rocher is expensive???? My BIL bought me some perfume as a gift and they gave him a hard time for buying me the cheap stuff. HA! I'm sure it was fake now.

I don't know how they can afford eating at quick and shopping at places like sajeda. Coming from america it is okay, but for algerians I dont understand.

You're bringing back some memories umm ibrahim. It makes me want to go back.

DD was over the moon to eat in there Ines! She's not keen on pizza. :/

Rainbow: She had drink from the machine, not a can so maybe they are 'doing it right' now! I ate pizza in one of the pizzerias with dh; it was just dd who was craving! lol. Didn't notice Yves Rocher tho.

UmmAbdurRahman: Glad you're enjoying the memories. :] I suppose there will always be a certain sector of people who CAN afford things.

oh yes i did see the wealthy algerians , that can afford lots more than we can even from the west mashaAllah. there is a society out there that have money mashaallah.