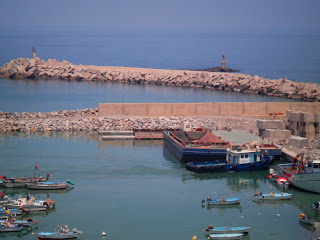 We took a drive along the coast to Cherchell during the week. It was a two and a half hour drive through some beautiful scenery: the Mediterranean sea to the right and fertile, green hills to the left. After Tipaza the road to Cherchell turned inland and the landscape became more lush: fields growing tomatoes, figs, plums and lots more besides. There were children at the sides of the roads selling baskets of freshly picked produce such as prickly pears and tomatoes. 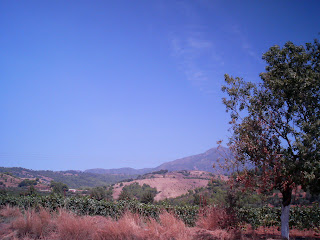 My 4 year old son was delighted every time we drove past donkeys which are used quite a lot for labour in the area. 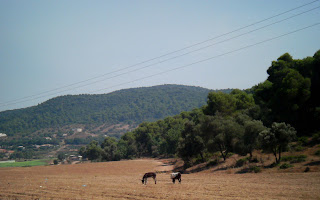 The actual town of Cherchell is quite old and run down like most towns I have visited in Algeria but it has a long and rich history dating back to 1500BC and the Ancient Egyptians. However it is best known for it's Roman ruins and the modern name Cherchell is the 'Berberisation' of the Roman name for the town, Caesarea.

The Masjid Er-Rahmane is quite a strange building built in the style of the Pantheon complete with Romanesque pillars. 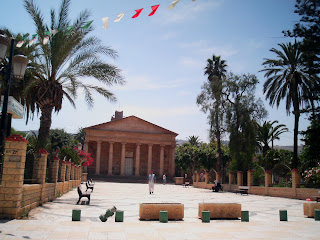 We also drove past a Roman aquaduct coming back out of Cherchell going back to Tipaza but I missed the opportunity to photograph it. See a photograph here. Amazingly intact piece of architecture.
Posted by Umm Ibrahim at 8/01/2008 11:06:00 AM

Nice pictures! Kid2 always gets excited when she sees a donkey. She always says something like, "ooooh - those are the most beautiful animals I've ever seen, mama!" HA.

Weird huh?! LOL! I don't where the onsession with donkeys came from... oh and purple too!

mash'Allah I've been in Cherchell and loved it too! Then all those road with donkeys etc. I love them too! Where did u drive from ukhti?

Nice to meet you Um Almujahid; we drove from outside Algiers (near Bouchaoui) to Cherchell. :)