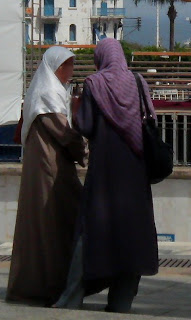 It's quite a change being in Algeria after Saudi Arabia as regards the hijab and abaya. Wherever you see a lot of women in Saudi, it is a sea of black. The abaya shops are just a variation of black in different designs but I have noticed that black, particularly head to toe black, is really uncommon in Algeria. If a woman wears a black abaya she will usually wear a colourful head scarf. Abayas (long flowing coat-like garment) come in all colours here and are usually completed with a contrasting head scarf.

Whilst it is still not common, I have noticed over the past 7 years that more and more ladies are wearing the Algerian Djelbab which is similar to the Saudi head abaya or Iranian chador. Unlike the Saudi and Iranian counterparts they are generally not black but brown, navy or green and almost always with a white scarf underneath - sometimes with niqab, most often without. The lady on the right of the photograph below is wearing the Algerian Djelbab in sage green with a white scarf underneath. 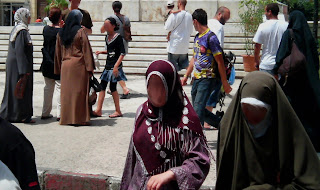 masha'allah, thanks for the knowledge sis.. i remember when someone posted that link in the forum.. I love em!! maybe WHEN i visit I will try to pick up a few insha'allah

I noticed all the different colours out there too, people accesorised with their hijab and it looked nice. People wore the colour that suited them, brought out their eyes and they looked pretty masha'allah.

Every country has its own national style of hijab. While Saudi Arabia has the least flattering stlye, I often wonder about the more refreshing styles and colors such as the ones you've shown here.

The purpose of hijab is to present women without emphasizing their attractiveness, yet certain hijab styles are highly attractive.

The women are covered, but covered attractively. Is this an oxymoron? I don't know. The directive is to "let their veils cover their bosoms," and that says nothing about colors or styles.

An interesting topic for all of us.