Tipaza is about an hour and a half's drive from Algiers or 70km and the drive along the coastal road is a pleasant one with tree covered hills to the left and the Mediterranean to the right.

Tipaza was originally founded by the Phoenicians and later the emperor Claudius made it into a Roman military colony and thereafter a Municipium. There are remains of an amphitheatre, churches and temples and graveyards among other things.

The entrance fee is 20DA (15p) for adults and 10DA for children. You can stroll around the remains, some of which are well shaded by trees including olive trees and even sit looking out at the Mediterranean since the ruins extend down to the rocky sea front and along the coast.

Map of the area (click on image to enlarge): 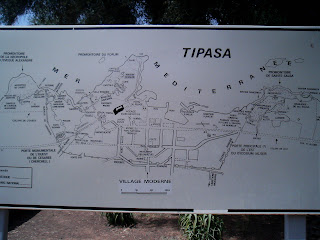 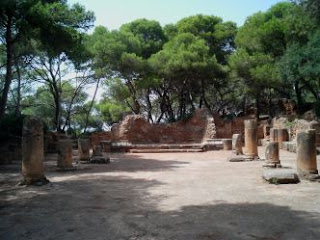 Some of the original mosaic tiling we found covered by sand. This tiling was in the ruins of one of the temples: 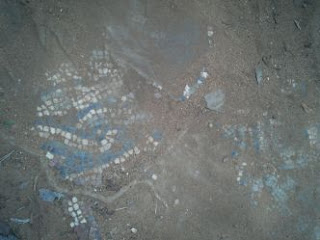 More tiling in one of the basilicas: 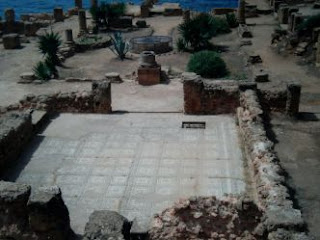 Allee that extends down towards the seafront: 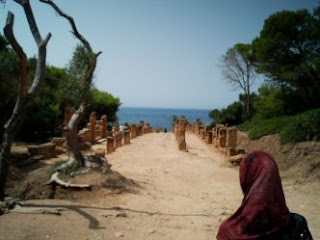 View from within towards the bay: 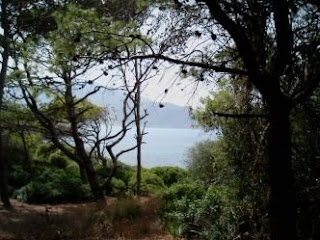 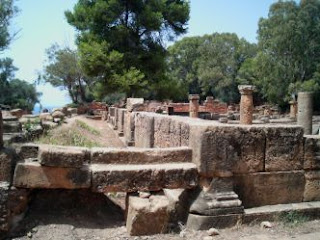 Salamu alaikum, i think this is my first time commenting on your blog. I went on my first visit to Algeria in April and I loved Tipaza. thanks for sharing the photos.

Tipaza looks lovely, will ask hubby to take me there when we are visiting family for Eid in September.

...adding Algeria to the list of must see places! :)

Pleased to meet you Ummabdurrahman - read some of your blog, hope all goes well for you and your family insha'Allah. :)

Tipaza is really not that far Sonya, it's a nice drive masha'Allah and it's nice to get away from Algiers! Hope you do visit.

l_oman.. we could trade places huh?! I love the most recent batch of photos you posted, masha'Allah.

MashAllah. It must have been lovely to see the sea again! I miss the water here in Jordan. I am from the San Francisco Bay Area. Enjoy your visit.

Nicole: Thanks. :] Yes, it was a really love visit.

mashaallah.. this is truly a beautiful place I had no idea exsisted in Algeria... thanks for showing us !!

Anisah: I had only seen the nice parts on tv... we never had a chance to drive off to other owns much before. There is far nicer than this in Algeria I believe!