We arrived in Algeria when the preparations for my youngest brother-in-law's wedding were well underway and the big day was almost upon us.

All the petits fours to give out to guests had already been prepared and placed onto little plates and inside decorated plastic bags. Necessary arrangements for the parties had been made and invitations dispatched. 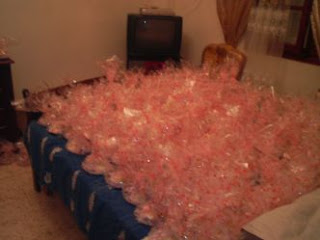 In the photograph above you can seen some of the bagged up petits fours, ready to be given out and below you can see a selection of the petits fours, all made with ground almonds as is typical for weddings and celebrations. From the top, clockwise there is Qnidlat which is ground almond inside a delicate, fluted pastry case; Fanid which is two rings of almond dough gently baked and decorated with sugar roses; a modern marzipan creation decorated with sugar and marzipan roses; and figues which is a marzipan fig filled with lightly roasted, ground almond. 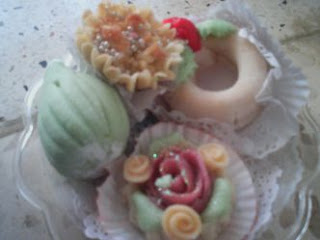 Everything culminated in a party mainly for the ladies on Thursday 10th although there was also a meal for the men at the in-laws' house on the Monday just before that. Around four hundred men were expected so there was plenty of work to be done.
On Sunday, two brothers-in-law and my sister-in-law's teenage son went off quite early to slaughter six sheep so there would be enough meat for the couscous the next day. When they arrived home, they brought the sheep's heads, stomachs etc which had to be cleaned immediately. The stomach, or as it is called here Dwara, is completely not to my taste but is considered a delicacy by many here and is prepared in a tomato based sauce with chickpeas. So the Dwara was cleaned, par-boiled and saved for the day after the men's party.
Several kilos of chickpeas also needed to be soaked overnight so they would be ready for cooking the next day. 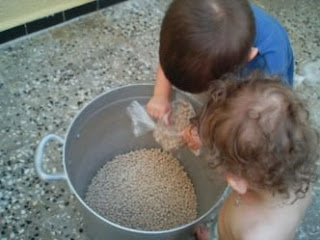 A few friends of my sister-in-law arrived in the late afternoon to assist with the mammoth cooking task the next day - ladies who were evidently experts in mass cooking operations!
Everyone was up bright and early on Monday and there was a feeling of excitement in the air. There were around 20 kilos of turnips to be peeled and sliced, bags of onions to cry over as we peeled them and prepared them to go in the food processor to be chopped, the ready chopped meat had to be strung together to make it easier to get in and out of the pots before the cooking could commence. 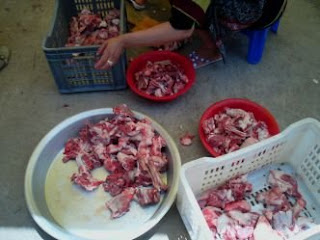 The stew was cooked in enormous couscousieres and the couscous was steamed until light and fluffy. 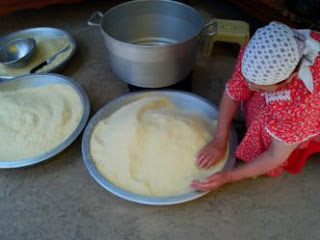 Meanwhile downstairs the men were arranging the tables and chairs and the guests started to arrive at around 7pm.
Given the limited space and the fact that there were only 50 chairs I was wondering what the arrangement was; if the men had been given different times to arrive for example. As it turned out, the men would come in in groups of fifty, eat fairly fast and then leave with their gift of a small plate of the petits fours then there would be a quick clean up and then the next group would enter. 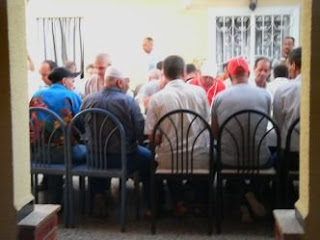 The men made a party for themselves out in the street while they waited and after they had eaten. There were two men with the duff (traditional Arabic drums) and one playing a traditional Algerian pipe and they played a jaunty, albeit repetitive tune to which some of the men danced while others clapped along. 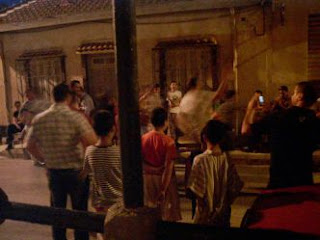 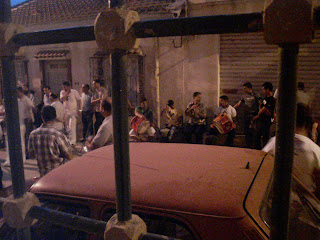 The next morning, a huge clean up operation was in full swing before preparations for the ladies' party could begin and that would be the highlight of the wedding...

thanks for the commentary sis masha'allah... keep it up :D cant wait to hear about the rest insha'allah

Salam,
Good work sis. I have always wanted to know about the marriage functions of different countries. Thanks for sharing it. Waiting for the highlight of the event - the ladies party.

Assalaamu'Alaykum! Oh my, you have written up such an awesome description that I feel I'm right there. The petit fours are beautiful mashaAllah and look divinely tasty!

Anisah: It certainly was fun peaking through the curtains at the guys dancing around outside and, moi, j'ai mange TROP de petits fours!

Ammena: this is what you have ahead of you if have the big day in Algeria!

Najeeba: This was my first Algerian wedding so it was an education for me. :)

DN: Yeah, the cakes were TOO tasty!

I love those petit fours! How cute! Thanks for sharing this - simply wonderful! :)

You'd have to be an expert to cook for that quantity of people! It sure does look great sis.... I could eat one of those cakes right now :)

Wow... I love the pictures, and the details of the event.. :D

Jazaki'Allahu khair for taking the time to share it all with us.

l_oman : I do love Algerian cakes and petits fours... ODing a bit and will need to diet when I get back to Riyadh I think!

Sonya: I think so too, I wouldn't know where to begin cooking for so many people!