On the morning of the wedding, Thursday 10th, everyone was up bright and early. There were borek: Algerian style spring rolls, to be fried as well as Mhancha (North African sweet which is filo-type pastry filled with almond and formed into a spiral) to be cooked.

Everyone had to get along to the salon to have their hair styled and if they wished, their make up applied. After seeing some of the wild make-up and scary eyes in the salon, I decided against it and applied my own when I got home! There was quite a wait in the salon since several ladies from the village invited to the wedding were also there getting a style and blow-dry.

My girls had their put up into pretty chignons and then hair glitter and lots of lacquer were applied, my own hair was trimmed and blow dried. When we finally arrived home it was time to get out the make-up and our party outfits and get ready to leave the house.

The wedding cortege - van with the duff and pipe players followed by cars filled with family members - left the village at 2pm for the drive into Algiers to collect the bride. 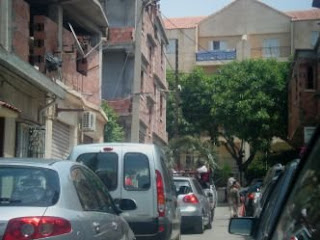 En route there was plenty car horn blowing and duff and pipe playing. As the cortege turned into the road where the bride and her family lived all the horns were blasting and the duff and pipes were in full swing. The cars parked and some of the men from the bride's family were distributing much needed bottles of gazeuse (fizzy pop) and wrapped plates of petits fours made by the family. My sisters-in-law entered the house to give salaams (greetings of peace traditionally given by Muslims) and help the bride down to the wedding car.

My 4 year old son was over-awed when he saw a 'princess' getting int0 the car next to us! She was wearing a traditional Western white wedding dress and looked every bit the fairy tale princess.

The wedding cortege set off once again to the salle des fetes (party hall) and whe we arrived there was plenty of yoi-yoi-yoi-yoi-yoi'ing (shrill celebratory cry) from the ladies as the bride entered the hall and went to the front to sit on the 'stage'. After a short while the bride disappeared to the changing room to change out of her white dress into another evening dress.

According to the tradition of Algeria, the bride changed seven times into different dresses, some of them evening dresses and some of them more traditional including one heavily emboidered Kabylie dress. In between changes and yoi-yoi-yoi'ing the guests were served cold drinks, borek, coffee, Mhancha and petits fours.

When the bride had finally changed back into her white dress the groom and some other men came into the wedding hall - completely without warning I might add. Fortunately I was well away from the door and had enought time to grab my khimar and put it on. 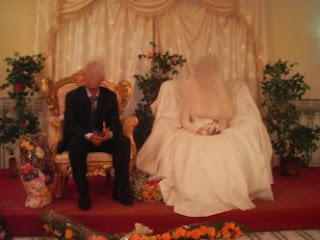 Rings were exchanged, photographs taken, kisses from grandmothers and then some dancing before people began to disperse.

The bride and groom came back to the village the next day and it was several days before the last of our house guests had left.

lol seven dresses?! That's awesome...sounds like it was fabulous fun...thanks for sharing your experience :)

subhanallah....you've made me even more "homesick" than i was before...roll on hijrah insha'allah !!

Seekingtaqwa: No definite date yet? :(

Wow 7 dresses:0
I've heard of 3 or 4 but 7 wow...
Its a bit disappointing that the men rushed in there without warning, in most cases theres some warning that the male species has arrived so women have time to gather up and cover themselves.
But sounds like you had alot of fun during the wedding, lol @ wild make up and scary eyes:P

sounds much like a Moroccan wedding... cept I thnk they change 3-4 times? not sure about that.
From what I have seen of the make up.. u made the right decision al hamdullilah

we have vague dates....which is about as definite as this family gets..we are all terminally vague.. ;)

Mina: Problem is that a lot of women don't seem to cover in front of family even if they are not close family. :/

Anisah: Do you have a blog?? Yep, am very relieved I gave the salon makeup a miss!

Sounds exhausting, but very lovely. Insha'allah they will have a happy and ever-lasting marraige.
Hope you enjoy the rest of your holiday sis... :)

Insha'Allah I hope you had a wonderful time :D

Sonya: Thanks. :] Nice to see you back on the www more, alhamdu Lillah.

But where this wedding was? Algeria or KSA?

Um Almujahid, the wedding took place here in Algeria where I am staying with the inlaws for the summer. :)