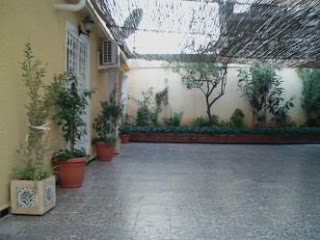 The Prophet (p.b.u.h) said, "Whoever takes a bath on Friday, purifies himself as much as he can, then uses his (hair) oil or perfumes himself with the scent of his house, then proceeds (for the Jumua prayer) and does not separate two persons sitting together (in the mosque), then prays as much as (Allah has) written for him and then remains silent while the Imam is delivering the Khutba, his sins in-between the present and the last Friday would be forgiven." [Bukhari, vol 2, bk 13]

I love summer Jumu'ahs in Algeria; it's the outdoorsie life, hearing the adhan and Qur'an from the masjid, the rush of people taking their showers according to the sunnah before going along to the masjid for prayer which gives a nice feeling.

The morning was relaxed; we drank our coffee outside on the veranda as usual and as midday approached we could the melodious sound of Qur'an wafting from the loudspeakers of the mosque. That's something I remember from my trip to Jerusalem a short while before I accepted Islam. I remember sitting in a little Arab cafe, sipping on strong Turkish coffee and wondering what the beautiful sound was that I could hear. The cafe owner sat down with us and explained that it was Friday, a special day in Islam and that the imam was reciting surah Maryam from the Qur'an.

So today, my husband dressed into a white gandoura (thobe like dress) and set off for the mosque to listen to the khutbah and pray and now as I sit here typing I hear sound of the asr adhan ringing out from the masjid and calling the faithful to prayer for a third time today. :-)

A blessed Yawm al-Jumu'ah to each one of you.

Allah's Apostle (p.b.u.h) talked about Friday and said, "There is an hour (opportune time) on Friday and if a Muslim gets it while praying and asks something from Allah, then Allah will definitely meet his demand." And he (the Prophet) pointed out the shortness of that time with his hands" [Bukhari, vol 2, bk 13]

I hope you had a great Jummu'ah too. I have made a post about this last week. You can read it here

masha'allah, glad youre having a good time there sis

Aslamu alakum ukti
imiss algeria and the yaum al jummah top of the list now i am in the UK jummah is any other day and this makes me soooo sad, enjoy it sis and try get out for the prayer at least once!

laila: Nice post, thanks for the link. :] I can't comment on your blog though for some reason... :/

Ammena: Well just relaxing so far really; hoping to get out and do some things this week insha'Allah.

Nice post. DUnno why but it made me a bit emotional. I remember being mesmerised by the athan when I was in Saudi as a non-Muslim. :D