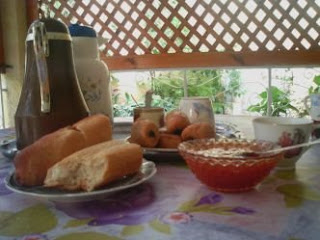 Since it's summer in Algeria now and there's not much chance of rain, breakfast can be enjoyed al fresco or rather as the Algerians would say, barra.

There is not a bowl of Cheerios or cornflakes in sight but rather there is baguette fresh from the boulangerie, homemade apricot jam, homemade biscuits and of course freshly brewed coffee and hot milk.

Despite the fact that the French rule ended in the early 1960's, there is still quite a mix of east and west in Algeria and a French influence remains. Although Algeria has it's own fair share of delicious breads made with either semolina or flour or both, the French baguette is ever-present at the meal table. It is enjoyed with jam, dipped in coffee, used to mop up soups and stews or simply filled with cheese. 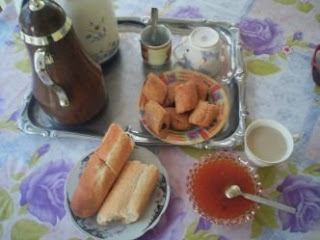 The biscuits in the photograph below are maqrout al-assal, a variation of the well known Arab-wide maqrout. They are made with course semolina, smen (clarified butter), orange flower water and are filled with softened date then deep fried and soaked in honey. 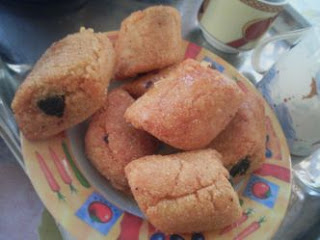 I love the fresh bread and homemade jams! Was so nice not to eat toast or ceral for breakfast. Dh would go out each morning to buy us fresh bread :)